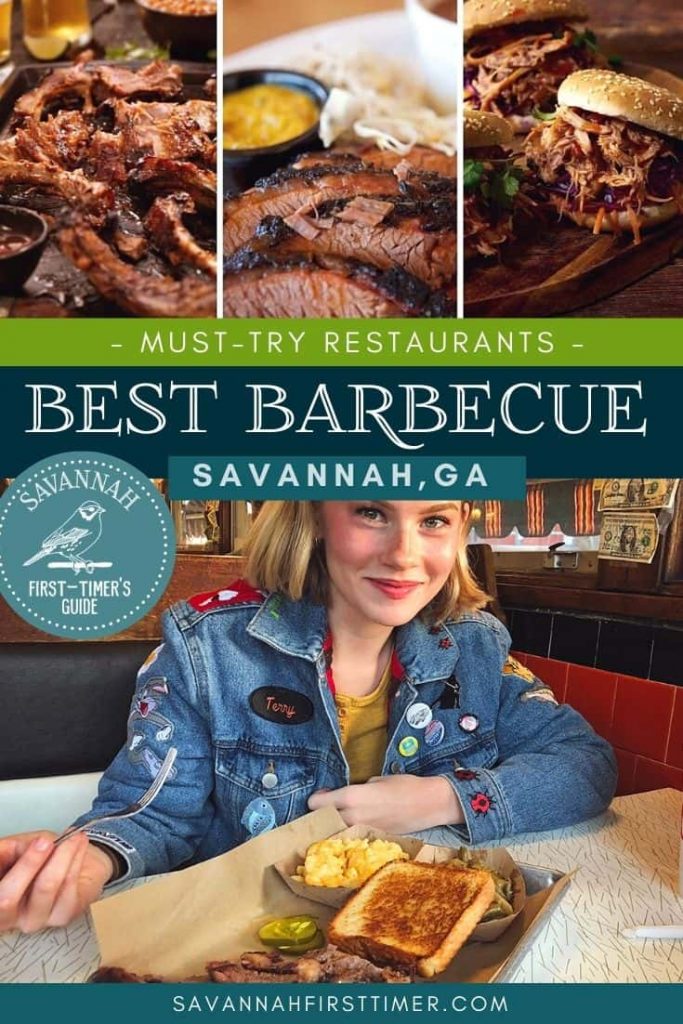 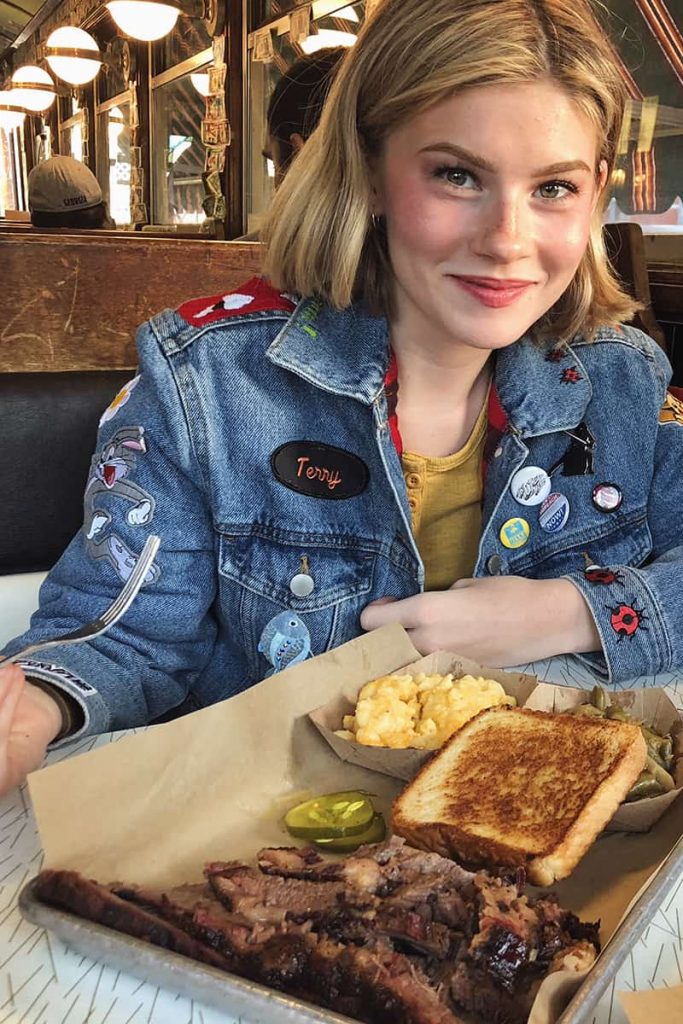 If you’re looking for the best bbq in Savannah, look no further! I’ve come up with a handful of yummy places to stop while you’re tasting your way through the city.

Those of you who are familiar with my site know I don’t like to overwhelm newbies with too many choices, so this list only includes a few of my very favorite BBQ spots.

If this is your first time here, first of all…allow me to extend a warm welcome!

My name is Erin, and I authored the Savannah First-Timer’s Guide. It’s a handy resource full of my best tips for visitors who have never visited the city before.

I realize the term “best” is a highly subjective — particularly so when it comes to BBQ.

You might be wondering what qualifies me to create this list, and the answer is…nothing, if I’m being perfectly honest.

I spent more than a decade living in the Texas Hill Country — which is home to some of the best BBQ in the world — so I’ve sampled a lot of incredible barbecue.

If there’s one thing my time in Texas taught me, it’s that few foods can beat the taste of a brisket so tender it practically melts in your mouth.

I’ve also tested some of the more well-known BBQ joints in Nashville and have enjoyed many hearty BBQ meals after hiking in N.C.

I was raised in S.C., so my first taste of BBQ (that I remember) was a mustard-based pulled-pork sandwich from a place called Price’s “If it ain’t BBQ, it ain’t food” in Gilbert, S.C. It hit the spot after a long day on the lake.

What I’m trying to say is…I appreciate a wide variety of barbecue styles (and sides). I’ll happily volunteer my services at a BBQ cook-off any day of the week!

In case you’re curious, here’s a key to the differences in regional BBQ sauces throughout the South.

Now, let’s move on to the good spots…

According to my taste buds, the team behind Erica Davis can do no wrong.

That won’t come as a surprise if you’ve read my post about the best seafood in Savannah, where they also claim a top spot!

Pros:
For the price, you get a LOT of high-quality food.

I’m a huge fan of both their brisket and the pulled pork. The Davis family has been in the catering business for years, so they know what they’re doing.

Their sides are also yummy. The mac n’cheese has just the right amount of creaminess, and I’m pretty sure their brussels sprouts are the only ones I’ve ever willingly eaten (and thoroughly enjoyed!) in my entire life.

I also enjoy the tangy flavor of their signature sauce, which is a red-based sauce.

Cons:
None, really…except maybe the fact that they’re located on the outskirts of the city, so you’ll need a car to get there.

Erica Davis Lowcountry is on the way to both Bonaventure Cemetery and Tybee Island, so I suggest planning a visit to the restaurant you’re making a trip to either spot.

Sandfly BBQ is the local spot that most closely reminds me of some of my favorite BBQ joints in Texas and North Carolina.

It has a homey “stop in and chat with the folks at the next table” kind of feel to it.

They have a handful of indoor booths, as well as three or four outdoor picnic tables, and the walls are decorated with old license plates and stickers from favorite local hangouts.

Pros:
Even though sausage isn’t typically my top choice when ordering BBQ, the sausage at Sandfly is really flavorful! I definitely recommend it.

Sandfly is another of my go-to spots for brisket. Theirs is nice and tender, with a pleasant smoked flavor and the perfect slightly charred outer edge.

Cons:
Sandfly is located on the outskirts of the city, so you’ll definitely need a car to get there.

The location is very close to Wormsloe Historic Site and Isle of Hope. If you’re making a trip to see the famous oak-lined drive, I highly suggest stopping at Sandfly on your way there.

I always like to pick a restaurant near me when I create these lists, and Munchie’s is one of my favorite grab-n-go options in the Starland District.

They have a couple picnic tables in the parking lot, but I generally consider Munchies a takeout spot.

The line usually isn’t bad, and they have an awning near the order window so you won’t have to suffer in the heat while you wait.

Pros:
The price is right at Munchies!

They give hearty helpings with sides for a very reasonable price tag.

Their cooking is down-home “soul food” style, and they smoke their ribs for hours.

The ribs are very popular, and they make their own sauce daily. It’s mustard-based, so that’s probably why I’m a fan.

Give their chicken a try, too, since it’s always moist and flavorful. The skin is crispy and almost pops in your mouth if you take a bite when it’s nice and hot.

Cons:
When they run out.

Munchies is a first come/first serve restaurant that’s popular with locals in Cuyler Brownsville and the Starland District.

That means folks start strolling past to grab food whenever the window opens for the day.

However, as soon as the food is gone, they close up shop and leave.

That’s no good if you’re staying in the Historic District and venture all the way down to 38th only to discover they’ve already sold out.

NOTE: Sometimes Munchies is open late at night, but I don’t recommend that option for first-time visitors. Trust me, you need to know your way around Savannah before you venture into the no man’s land at the corner of 38th and Montgomery after dark.

Randy’s is an authentic little BBQ joint located on Wheaton Street. That’s on the city’s east side and far from the typical tourist zones.

Just look for the blue building with the long line out front, and you’ll know you’re there.

Pros:
You get large portions at a great price.

Randy’s is one of the OG barbecue restaurants in Savannah, so they’ve been around long enough to have perfected their craft.

In fact, I think (but am not positive) the folks who run Munchies actually worked at Randy’s back in the day.

The ribs are the star attraction at Randy’s, and you almost always get more than you pay for when you go. You absolutely won’t walk away hungry.

Cons:
Plan to stand in a very long line while waiting to place your order.

There’s no shade from the relentless Savannah sun, either, so you might want to bring a bottle of water to drink (or to douse yourself).

Think of the line at Randy’s similar to the line at Leopold’s Ice Cream or Mrs. Wilkes, and use your wait time to get to know the other folks who are hanging out in the hot sun.

Side note, but I really want the TWIN-Monade girls to set up camp outside Randy’s when they’re out of school during the summertime; they could make bank. (The folks at Randy’s might not take too kindly to that, though.)

There are plenty of additional options for BBQ in Savannah, so I’ll go ahead and give you a quick rundown of some others.

Make note that the best spots are usually the more authentic hole-in-the-wall locations on the outskirts of the city versus any spot you’ll find downtown.

If you’re looking for the best BBQ along the Georgia Coast, Southern Soul Barbecue on St. Simons wins that contest every time.

As for my favorite BBQ I’ve ever tasted? I still haven’t found anything on the East Coast that beats Coopers Old-Time Pit BBQ in the Texas Hill Country (the Llano or the New Braunfels location).

If you’re planning to visit the Savannah area and are looking for travel resources, I’ve created a few to help you out.

Do you have any questions about these BBQ restaurants in Savannah? If so, please let me know in the comments below.