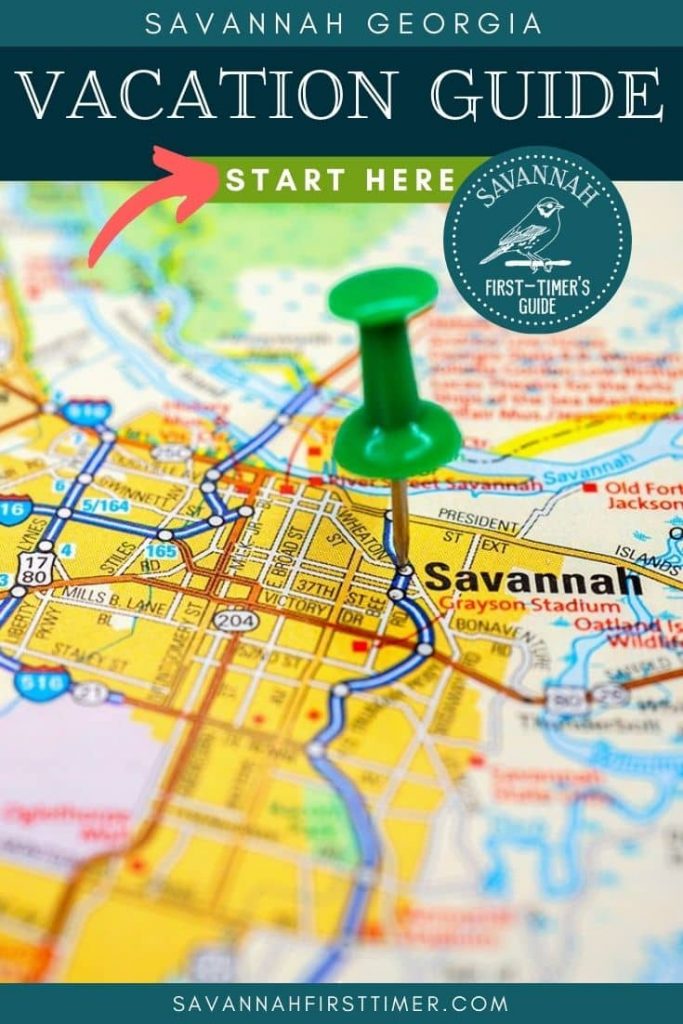 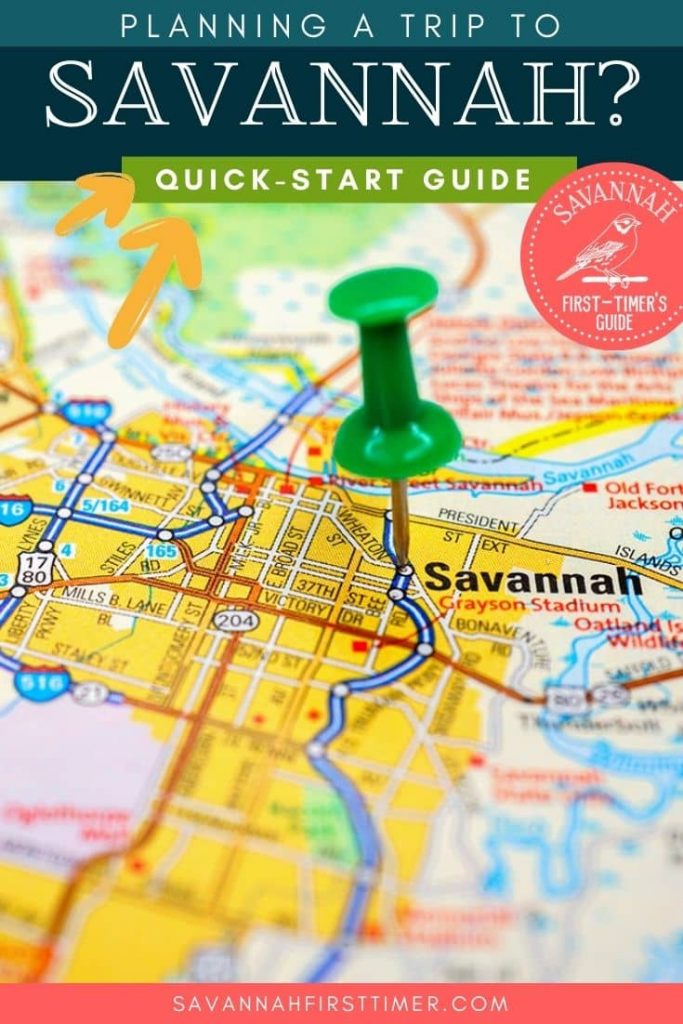 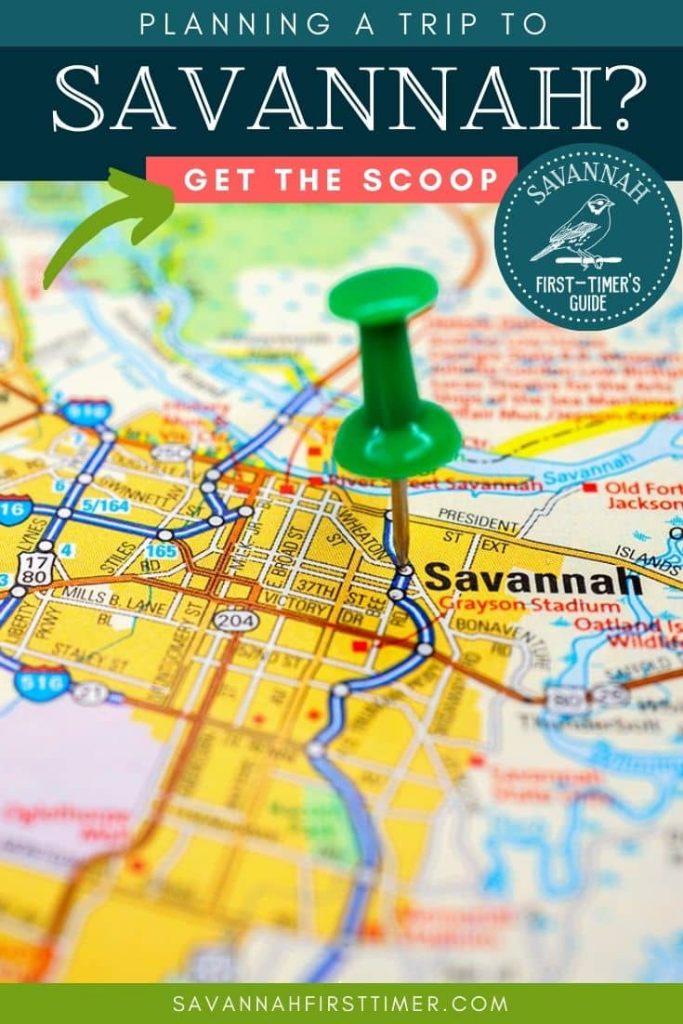 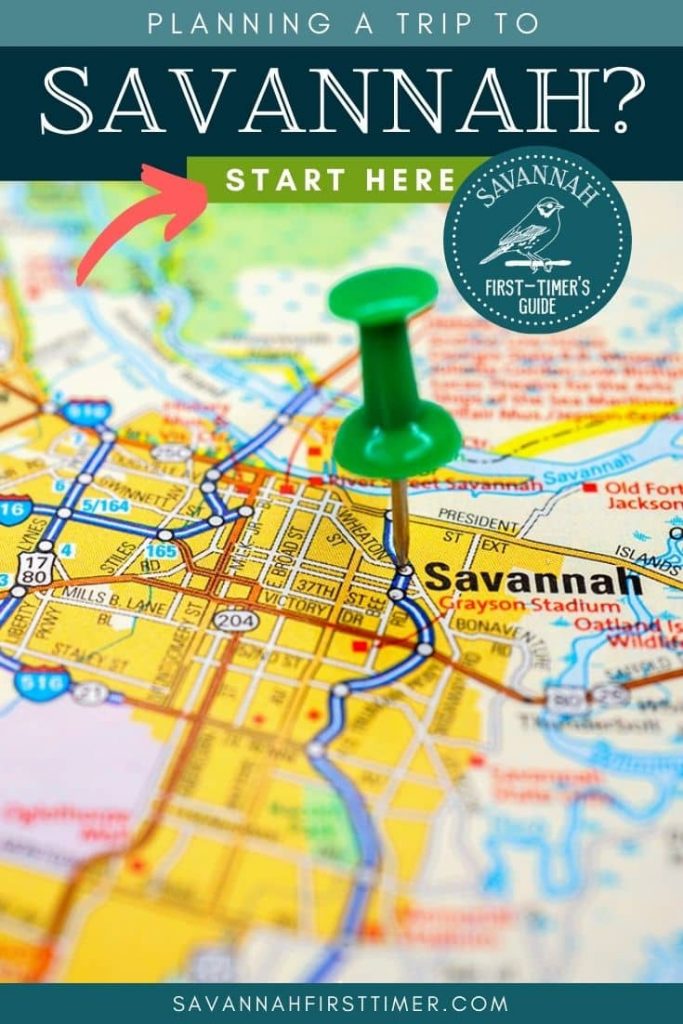 Are you ready to start planning a trip to Savannah but feel overwhelmed by all there is to see and do in the city? No worries! I’ve got you covered with this handy Savannah, Georgia “vacation starter guide”.

Consider it a brief overview to get you started with your trip-planning adventures!

If you’re new around here, first of all…welcome! My name is Erin, and I authored the Savannah First-Timer’s Guide.

It’s a very helpful resource (or so I’m told) that contains some of my best Savannah travel tips in one downloadable ebook.

Before you can begin booking flights or planning a trip to Savannah, you need to decide when to visit and determine where to stay, right?

You probably also want to know the answer to the frequently asked question, “Is Savannah safe?” — especially if you’re traveling solo.

I can help with all of the above. I live in Savannah and go for walks throughout the city on a near-daily basis), so I know the city pretty well. I’m happy to help!

Let’s start with the basics…

Location: Savannah is located along the beautiful Georgia coast in the southeastern portion of the United States.

The South Carolina Lowcountry is just across the river, so many travelers combine their visit to Savannah with trips to the Lowcountry.

If you have a full week to travel, it’s popular to split time between Savannah and Charleston.

Size: The current population of Savannah is around 142,000. It’s a city, but it feels much more like a small town!

When most people picture Savannah, the Historic District is the image they have in mind.

NOTE: My free resources library contains a printable list of 50 things to do on foot in the Historic District. The list includes enough things to keep you busy for at least a few days.

One of the first things you’ll need to determine when planning your trip is deciding which time of year to visit.

There are pros and cons to each season — except summer, which offers only cons.

Most Popular Season: Spring is the most popular season to visit Savannah.

That’s when the azaleas and Confederate jasmine are in full bloom and when the Historic District looks its prettiest.

Allow me to present some photographic evidence…

That’s because Savannah is home to of one of the largest St. Patrick’s Day festivals in the United States!

Savannah’s weather during March is so nice it’s often referred to as “Chamber of Commerce weather”.

Since the weather is nice in the fall, and because Savannah is known for its extreme spook factor, October is a close second in popularity.

Low Season: The low season occurs in January and February and then again in August and September. You can usually find the best deals in January, February, and August.

Weather is a big factor in determining when to visit. Fortunately, Savannah has nice weather for the majority of the year — except summer.

Are you sensing my disdain for summer weather yet?

Winter: The winter season is rather mild. You might wear a jacket and gloves in the morning, short sleeves during the day, and then need your jacket again once the sun sets.

Average highs are in the mid 60s to low 70s and the lows are typically in the upper 40s. Snow is so rare that it only happens once every five to ten years.

The highs are usually in the mid 70s to low 80s. Lows range from the upper 50s to mid 60s. It rains some, but not enough that it would ruin your plans.

Summer: I cannot stress enough how hot and humid it is in Savannah during the summertime.

It’s not hot like Florida, where you get a steady coastal breeze and the warmth of the sun feels good on your skin. It’s hot in a soul-sucking kind of way — where the air feels dead and swampy.

You’ll find yourself thanking sweet baby Jesus every five minutes for the existence of air conditioning and icy drinks.

Because it’s so humid, it’s common to have mid-afternoon showers during the summer months. The heat and humidity build up until they reach their breaking point, and then the afternoon thunderstorms roll in like clockwork every day around 3 pm.

The leaves usually begin to change colors in late November and last throughout December. It’s very common to see trees with fall color in front of homes that have Christmas trees in the windows!

The Atlantic hurricane season technically begins in June, but it’s rare for the bigger storms to hit earlier than August.

It’s common for Savannah to fall in the direct path of a major hurricane at least once per year, which results in mandatory evacuations of the city.

Hurricane season in Savannah peaks in September and early October. The season technically ends at the end of November, but it’s rare to have storms that late into the season.

I highly suggest travel insurance for hurricanes to cover potential trip cancellations if you book a trip anywhere from mid-August to mid-October.

If anything above a Category 3 storm rolls through Savannah, city officials usually instate mandatory evacuations.

My Savannah First-Timer’s Guide goes more in-depth into the pros and cons of each season, and it includes major annual events you might need to consider during the trip-planning process.

For example, there are a few times each year when accommodation prices spike due to the crowds. It’s best to avoid traveling during those times unless you have a specific interest in the associated events.

Step two after deciding which time of year to visit is deciding where to stay. The further in advance you can book your accommodations, the better chance you have at scoring a good deal!

Historic District: As I mentioned in the intro, the Historic District is the most popular section of Savannah. In fact, I highly recommend staying there if your budget allows.

It’s filled with beautiful mansions and is broken up every other block or so with green spaces called squares. You can walk to most attractions, so you won’t need a car.

Some of the most well-known spots in Savannah are located in the Historic District. Those include River Street, Factors Walk, Broughton Street, City Market, and beautiful Jones Street.

As you might deduct from the name, you’ll find a high concentration of Victorian-style homes in the area. Savannah has some incredible Victorian architecture. Here’s more photographic evidence as proof…

It’s popular for its trendy restaurants and hangout spots, as well as its thriving art scene. Starland is where you’re likely to find lots of locals hanging out (as well as Southern Living editors, apparently).

It’s considered an entertainment zone, and there are plenty of restaurants, shops, and bars in this area. To learn more, check out some of the must-see spots in the Plant Riverside District.

My Savannah First-Timer’s Guide goes into detail about the various sections of Savannah. It includes lots of photos of each area and has a printable map of the Historic District.

If I had a dollar every time I was asked this question, I might own a fancy mansion in the Historic District instead of my modest little house in Thomas Square!

I have lots of thoughts on the topic of safety in Savannah, but I think we can agree that it’s important for you to pick a safe place to stay — especially if you opt for a home rental outside the boundaries of the Historic District.

While Savannah looks like a charming small town, in actuality it’s a city and has the level of crime you might expect in any metropolitan zone.

Don’t be fooled by the Historic District’s endearing vibe and think it’s safe to leave your doors unlocked or to go wandering around in unfamiliar areas by yourself late at night. It’s not.

My crime map shows violent crime statistics for the current year in Savannah. The focus is on homicides, stabbings, and gunshots with injuries.

I don’t keep track of all crimes — only the worst of the worst. You can click on each incident on the map to pull up additional details about it.

Overall, if you’re a first-time visitor to Savannah, the Historic District is the ideal place to stay!

It’s generally well-patrolled by the Savannah Police Department. There are very few trouble spots…and those are only bad in the wee hours of the morning when you’ll probably be fast asleep.

If you’re worried about safety, my ebook has an entire page of places that are best for first-time visitors to avoid.

Since I haven’t mentioned it yet, I also want to point out that if you haven’t read John Berendt’s book, “Midnight in the Garden of Good and Evil“, I highly suggest doing so before your trip.

It’s a New York Times Best Seller about the eccentric personality types who tend to choose Savannah as their home.

It also covers the most famous shooting that ever occurred in Savannah, so it’s a true crime “must read”. (Promise me you’ll read the book BEFORE you watch the movie. The book is so much better!)

OK, hopefully the posts linked above will help you narrow down when and where to stay.

Remember, for my top insider tips, my Savannah First-Timer’s Guide is the most in-depth Savannah vacation planner you’ll find!

Do you have any Savannah Georgia vacation questions for me? As always, please let me know in the comments below.