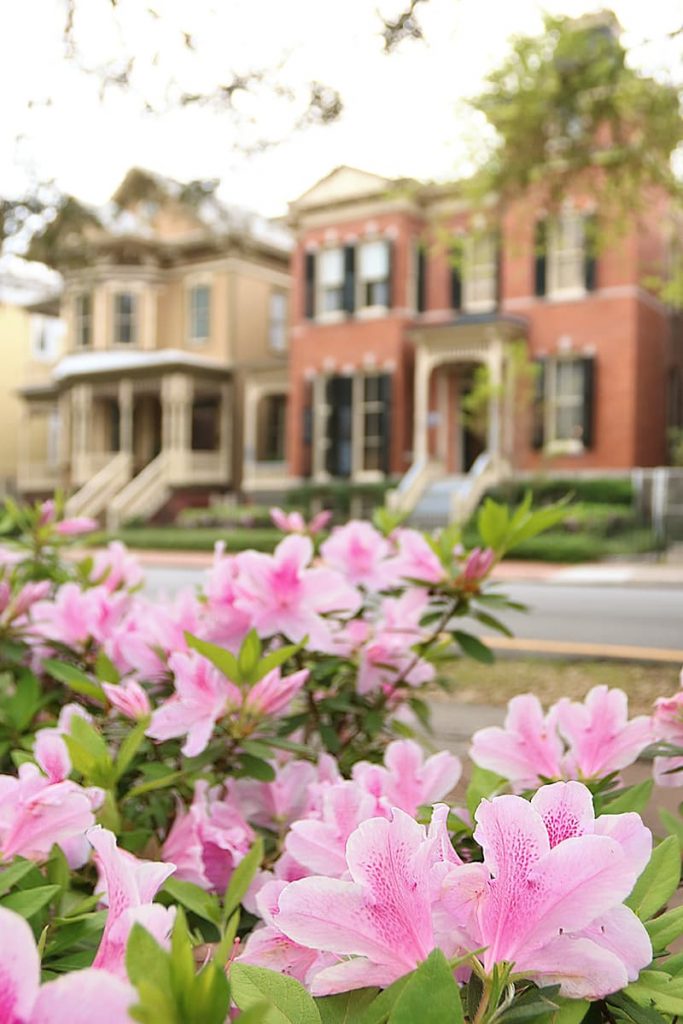 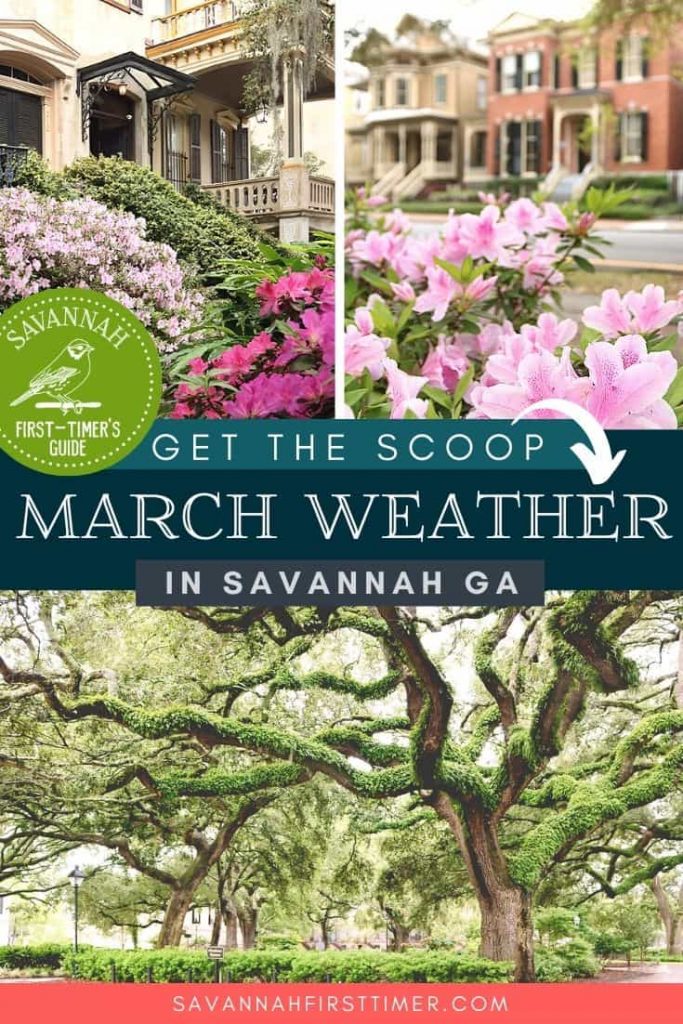 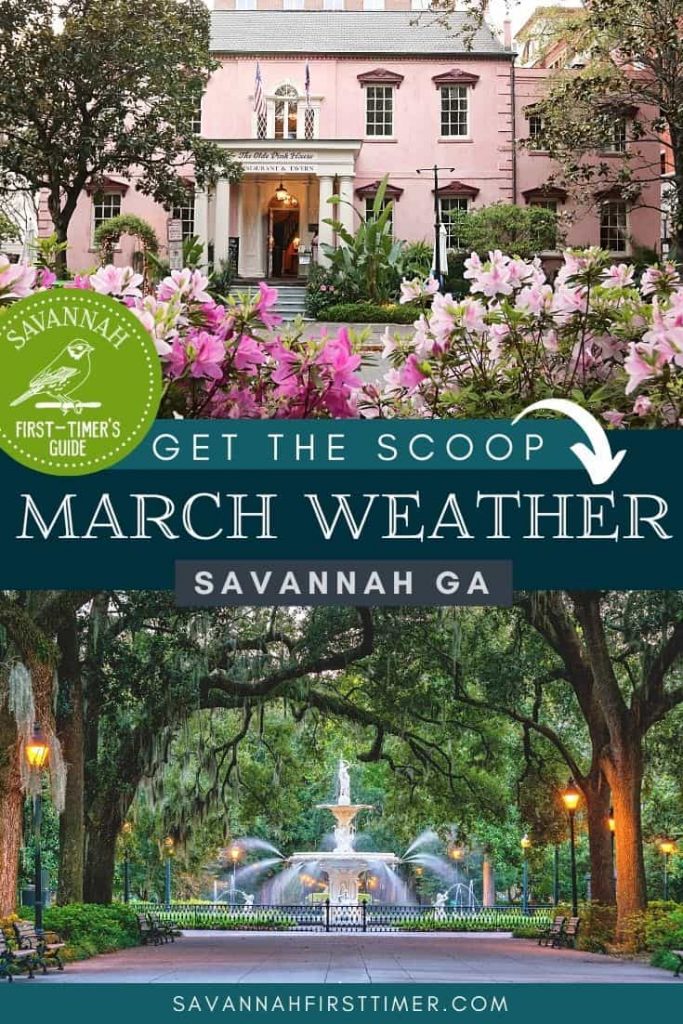 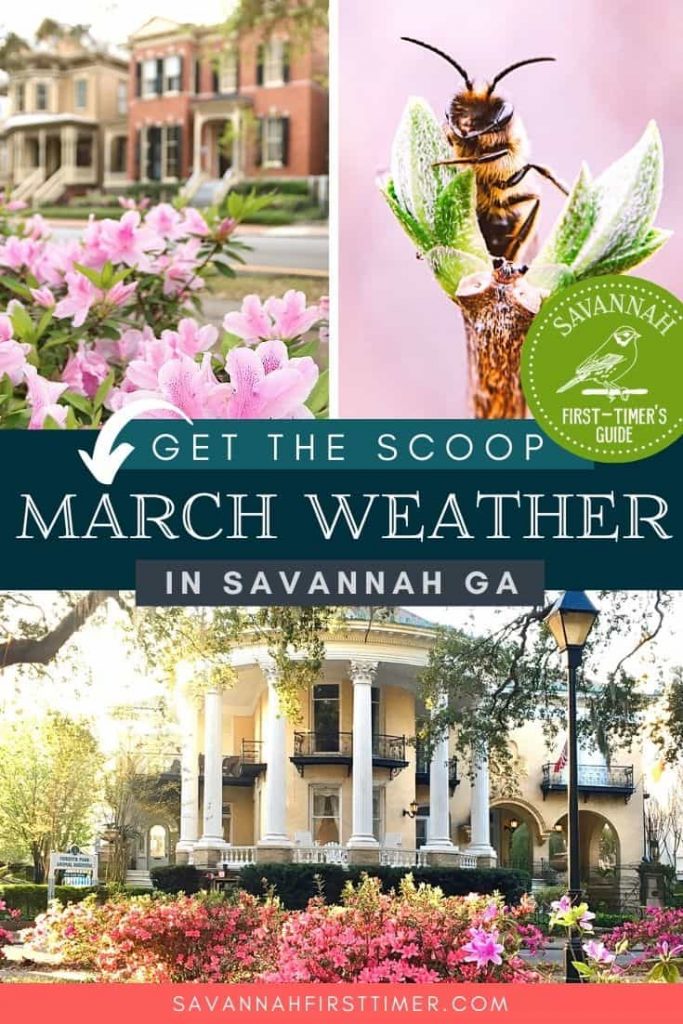 Want to find out what to expect from Savannah weather in March? You’re in the right place!

It’s one of the best times of year to visit Savannah, especially once all the beautiful azaleas start to bloom.

Find out the average highs and lows, what type of flowers you’ll see during your visit, and what to do about that dreaded yellow pollen.

If you’re new around here, first of all…welcome!

My name is Erin, and I authored the Savannah First-Timer’s Guide. I live in Savannah, and I love sharing my photos of the city.

I’m known for sharing the pretty and the gritty sides of the city, so if there’s a downside to visiting in March, you can count on me to be honest about it.

Fortunately (for all of us), March is one of the good months!

Overall, the weather during March in Savannah is pretty ideal.

So ideal, in fact, that you might hear it referred to as “chamber of commerce weather”.

March one of the biggest months of the entire year for tourism in the city.

The humidity hovers around 67% during the month of March and is highest in the morning. It generally decreases as the day goes on.

It doesn’t rain too often in Savannah in March.

Out of 31 days in the month, only 8.1 of them see any significant rainfall. If it does end up raining during your visit, you can pick up a poncho at the Visitor Center and take a trolley tour to stay dry while checking out the architecture throughout the Historic District.

As an added perk, March is when the azaleas typically bloom in Savannah!

It’s difficult to pin down their exact peak bloom time until a week or two beforehand, so that makes planning a trip to see them difficult — especially if you’re traveling from a distance.

It’s hard to time a trip perfectly unless you know someone in the area who can keep you updated.

That’s where knowing me comes in handy!

You can always get updates by asking in my private Facebook group. I go for walks in the city daily and post photos so you can see the progress of the blooms.

Generally speaking, if you book a trip during the second half of March, chances are pretty good you’ll see Savannah’s azaleas at or near their peak.

If they bloom early in the season, sometimes random bushes will start showing buds as early as mid-February!

When that happens, they usually peak closer to the beginning of the month.

It’s more common for them to begin showing buds near the beginning of March and then have flowers on full display towards the end of the month.

The peak bloom time only lasts about a week and a half to two weeks, so you have to time your trip just right to see the magic happen!

If you’ve never seen Savannah when the azaleas are in full bloom, I can tell you it’s quite a sight.

Nearly everywhere you look, you’ll see seas of pink, white, and red blossoms. It looks like something out of a storybook.

No matter how jaded I become about this city (and I can get pretty jaded), I fall in love with it again every spring as soon as the azaleas start to bloom.

One of the drawbacks to March weather in Savannah is that pollen covers nearly every surface.

If you sit still long enough, you might even find yourself covered in yellow dust!

I sometimes joke that the streets look like they’re paved with gold during pollen season.

Thankfully, the yellow pollen that you see coating every surface in Savannah isn’t responsible for causing allergies. (The pollen size is too large to wreak havoc in your respiratory tract.)

That doesn’t mean there won’t be other allergens in the air to cause issues, but the yellow pollen looks a lot worse than it’ll make you feel.

It has a bark that’s worse than its bite!

Pack an antihistamine in case one of the other allergens in the air causes problems, but otherwise — just try to ignore the yellow stuff.

Since so many people carry masks these days anyway, use one to add an extra layer of protection against airborne allergens if you’re particularly sensitive.

What to Wear in Savannah in March

Bring a sweater or lightweight jacket in case it gets chilly at night, and always pack comfy shoes when you’re traveling to Savannah!

You’ll probably do a lot more walking than anticipated. (It’s common for tourists to walk 20k+ steps per day.)

Lightweight layers will work for your top half, and you can have your pick of your favorite covering for the bottom half.

I don’t suggest wearing white pants during March, though. If you do, don’t plan on sitting anywhere outside.

Unless you’re really cold-natured, you probably won’t need gloves or a hat, and you can definitely leave the heavy winter coats at home!

As always, check the local forecast before leaving for your trip.

If you’re ready to start planning a trip to Savannah, I’ve created a few resources to help you out.

Anything I left out about Savannah GA weather in March? If so, drop your questions below!