Join the Free Resources Library to get my checklist of 50 Things to do On-Foot in Savannah's Historic District LET ME IN! 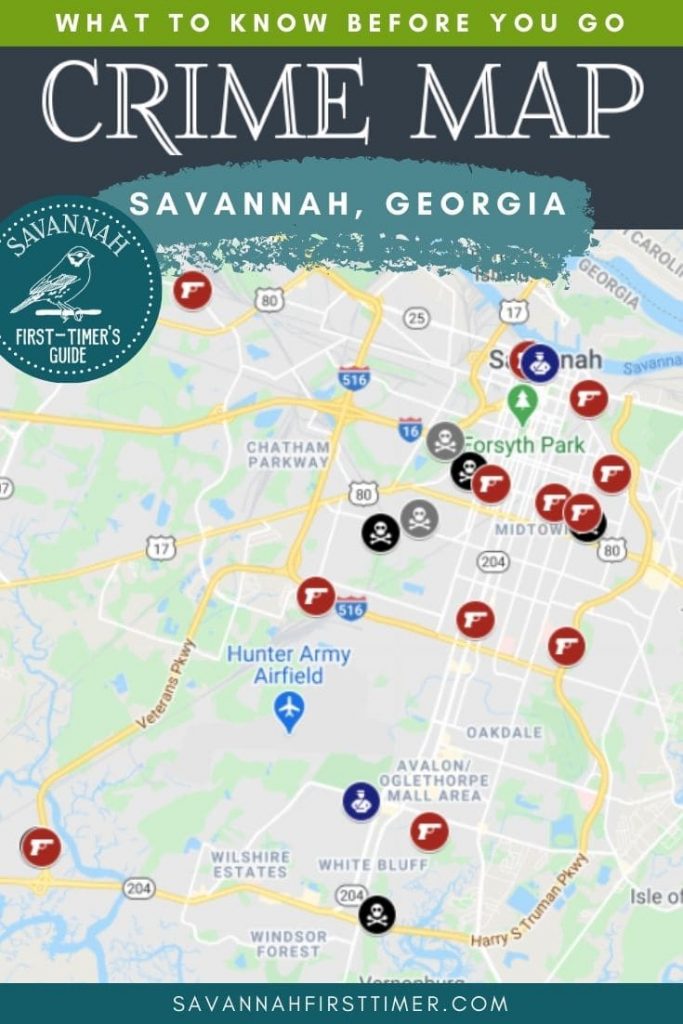 I’m a bit of a statistics nerd, so I decided to create a Savannah crime map to keep track of the shootings and homicides that occur in the city. The Savannah Police Department usually lags a few weeks behind in their reporting*, but since I frequently help readers find safe accommodations, I need current statistics.

I finally just created a map of my own!

I don’t keep track of every crime that occurs in the city. Ain’t nobody got time for that. I only track incidents that result in death or injury. In a few rare exceptions, I may also list drive-by shootings where multiple homes were damaged but no injuries occurred.

I think it’s helpful for visitors to be aware of current crime statistics when visiting any urban area — not just Savannah. Here are the current results for crime in Savannah in 2021…

Click on any icon to pull up additional information and links to news reports about each incident. View directly on Google maps here.

What’s Included on the Map

As I mentioned above, I don’t keep track of every outstanding call for “shots fired”. While writing this post, I heard four separate gunshot incidents during a one-hour time frame. That’s a busy night, even by Savannah standards! Thankfully, that isn’t the norm, but it did spur me to write this post.

For Reference: I live in the Thomas Square neighborhood, which is south of Forsyth Park and north of Victory Drive. My area is also sometimes referred to as the Starland District. I live closer to the east/west center dividing line (Bull Street) than I do to the outskirts of the neighborhood.

I only track incidents where a person was either injured or killed. So, my crime map includes homicides, stabbings, and gunshots WITH injuries. I also included a section on suspicious deaths.

Click on any icon on the map to pull up additional details, links to pertinent news articles, and follow-up reports. You may need to zoom in, since some of the incidents overlap.

Murders in Savannah in 2021

In the majority of the homicides listed above, the individuals had an issue with one another and opted to resolve their problems with a weapon. That means the incidents weren’t random.

For clarification, here’s a very general guide to help you differentiate the basic sides of Savannah:

Safest Areas to Stay in Savannah

If you’re traveling to Savannah, I recommend staying within the boundaries of Historic District. Those boundaries are as follows:

The center east/west dividing line is Bull Street. It’s generally better to be closer to Bull Street than towards the eastern and western outskirts of the Historic District.

Overall, the Historic District is very well-patrolled by the Savannah Police Department, and I consider it a generally safe area. Millions of tourists visit this city each year with no incident!

Just remember, crime can occur anywhere. This crime map is simply a tool to show current trends so you can be an informed traveler.

If you’re still concerned about crime and safety, I included a chapter in my Savannah First-Timer’s Guide ebook dedicated to areas first-time visitors should avoid.

These posts may also help with your trip-planning:

If you prefer to see the prettier side of Savannah (who wouldn’t?!) and avoid the topic of crime, you might prefer these posts:

Make sure to bookmark this Savannah crime map if you want current statistics! I’ll update it as events make the news and promise to do my best to keep you informed.

Related Reading: My free resources library has a helpful list of 50 Things To Do On-Foot in the Historic District (no car necessary!), plus other helpful printables.

If you have any questions about this Savannah crime map, let me know in the comments below.

*SPD tracks a much higher number of statistics. They track violent and non-violent crimes, which means they also list car break-ins, auto thefts, bicycle thefts, shoplifting, and more. You can find their statistics on the Savannah Police Department website under the “Weekly Reports” section of the Crime tab. You can also check the Lexis Nexis Community Crime Map, but please note that many of those incidents are not posted in the exact location where they occurred; they sometimes shift the location by many blocks for privacy reasons.