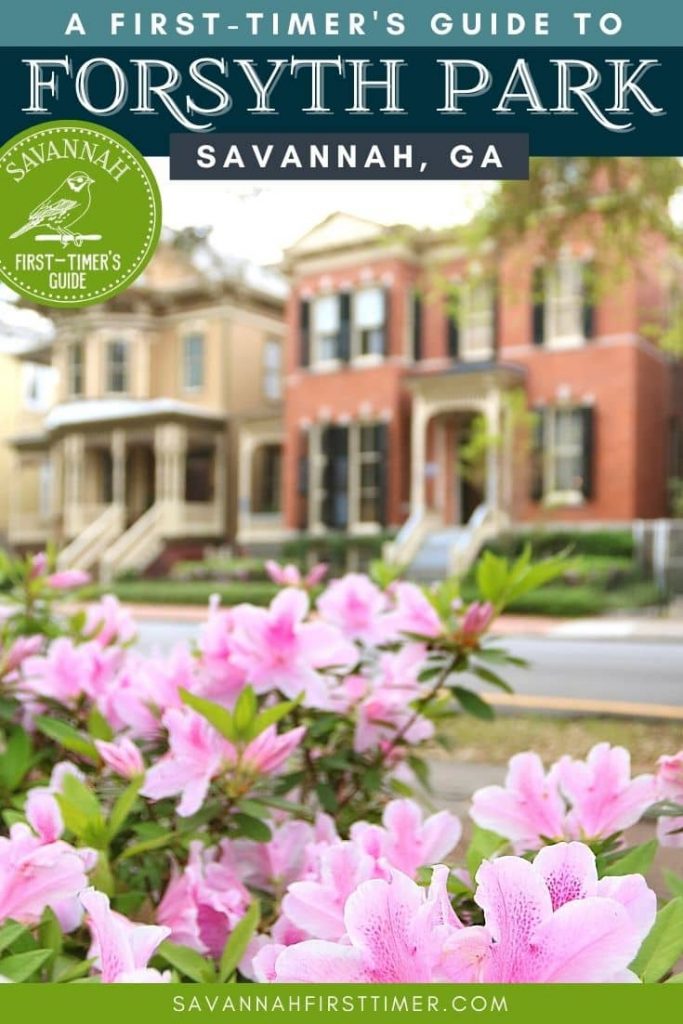 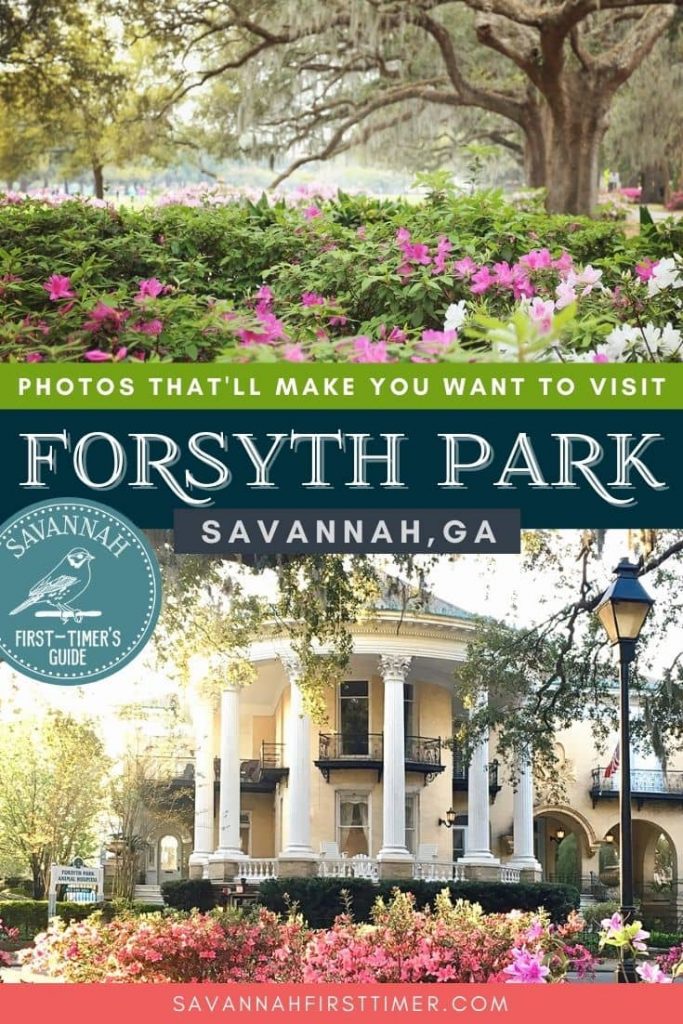 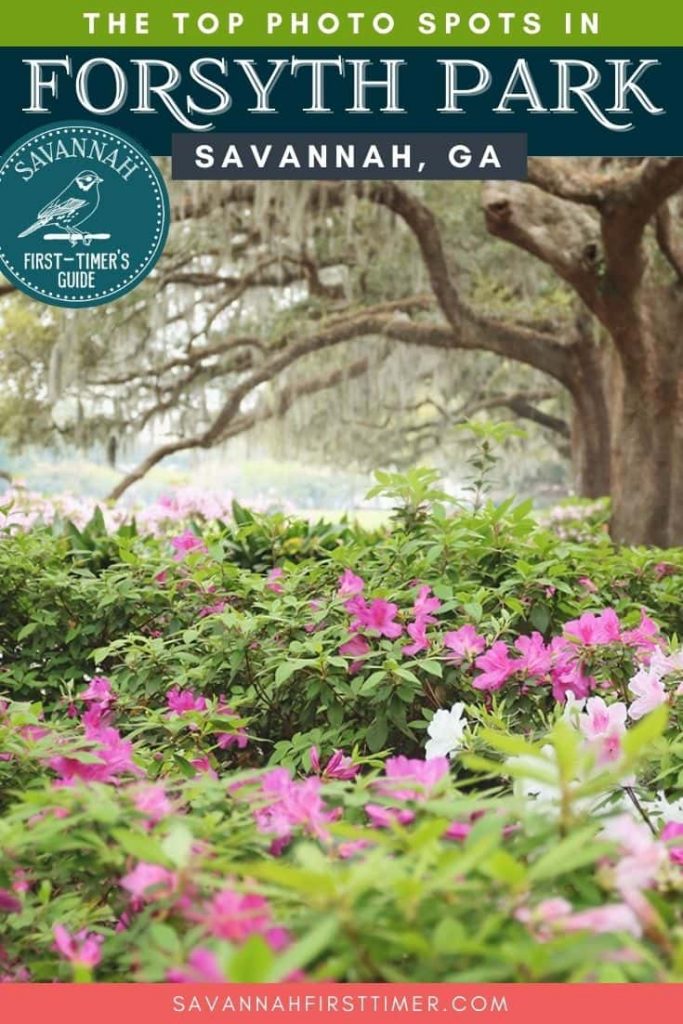 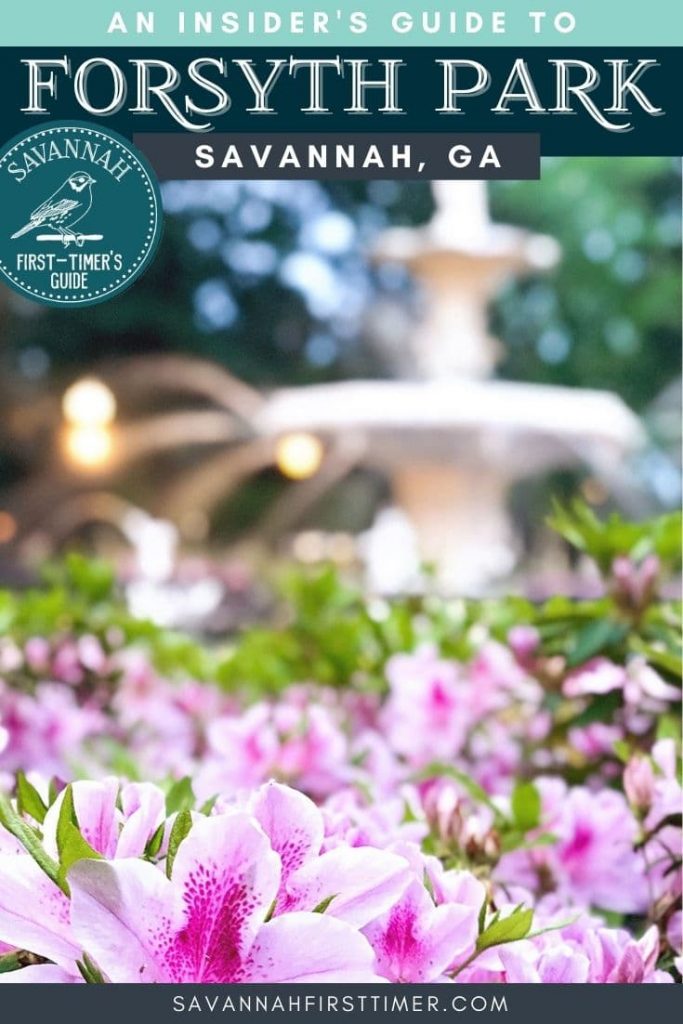 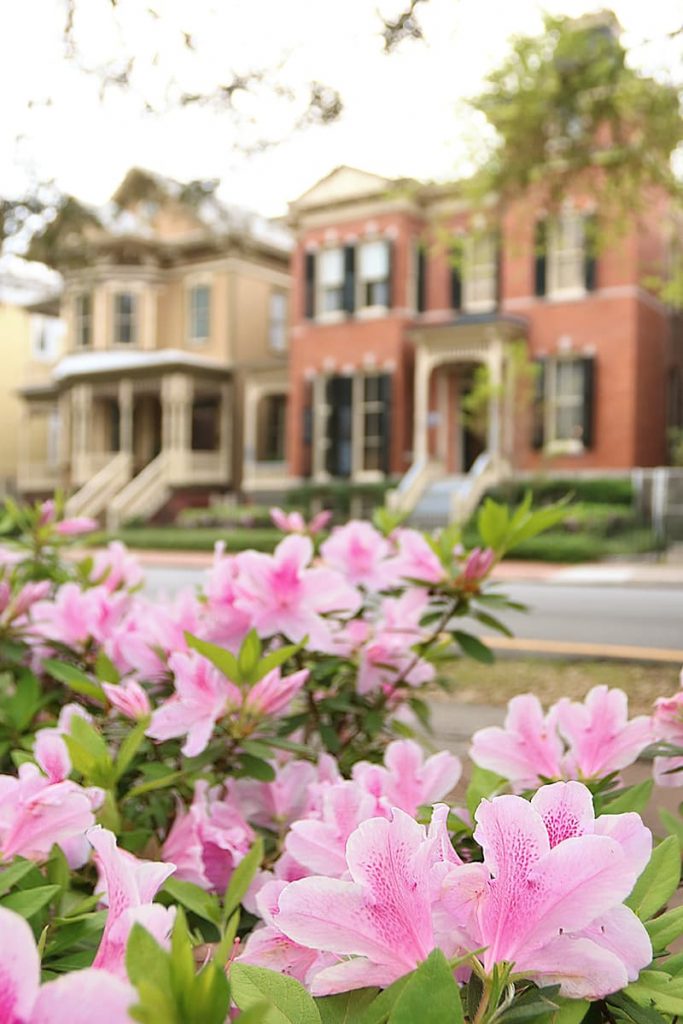 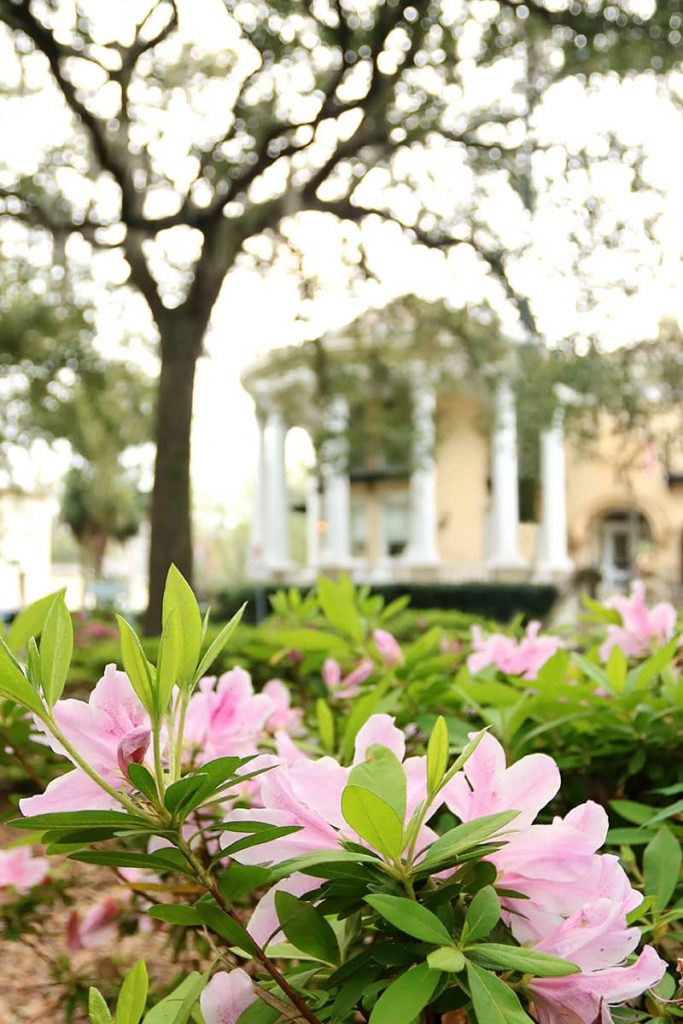 Forsyth Park usually ranks high on the list of “must see” spots in Savannah, so…you know what that means! Today I’m going to share some of my favorite photos of the area to help you see what makes it so special. That way you can decide if you want to add it to your itinerary or not.

If you’re new around here…welcome! I’m Erin, and I authored the Savannah First-Timer’s Guide.

I enjoy helping visitors get to know the city, and I love sharing my photos of Savannah.

The famous Forsyth Park fountain is probably the most well-known feature of the park; it’s an iconic location for selfies, engagements, and elopements.

The surrounding benches are perfect for people-watching.

I’ve spotted a handful of surprise engagements in front of this fountain through the years, plus more elopements than I can count!

What makes the fountain so famous?

Well, it helps that it’s one of the more recognizable symbols of Savannah.

It’s also been featured in lots of movies and TV series. For example, here are a few shots I took during filming for the new Amazon series, “Underground Railroad”.

I was in Forsyth Park when they filmed the episode, and it was really interesting to watch!

Even though I took these shots during the day, much of the filming occurred really late at night.

They shut off all the lights in the park, so it looked rather eerie.

First-Time Visitor Tip: Forsyth Park was also featured in the movie “Midnight in the Garden of Good and Evil“, which is based on John Berendt’s book by the same name. If you haven’t read it yet, I highly suggest reading it before your trip! The book is so much better than the movie.

A Brief History of Forsyth Park

In 1841, the park only consisted of 10 acres of land and was known as Hodgson Park. (That explains why the beautiful Georgia Historical Society building facing the park is called Hodgson Hall.)

It was conceived by scientist and American diplomat William Brown Hodgson.

In 1851, the park was renamed Forsyth Park after former Georgia Governor John Forsyth, and then it was extended between 1867-1869 to include military parade grounds on the southern end.

There were a few dummy forts near the center of the park. One currently serves as a restaurant and another as the Forsyth fragrant garden.

My research shows the fountain was added around 1858 (I think the historic marker has the wrong date?), and — believe it or not — it was ordered from a catalogue!

It was simply known as the No. 5 design in the “Illustrated Catalogue of Ornamental Iron Work Manufactured by Janes, Beebe, and Co.”

You can see similar No. 5 fountains in Poughkeepsie, NY and Madison, IN.

The fountain has seen a few minor redesigns through the years.

The four tritons were damaged by vandals in the early 70s and had to be reconstructed, and the top statue toppled after an ice storm in 1977 and had to undergo repairs.

These days, it looks as pretty as ever!

The Friends of Forsyth group is currently making plans to redesign the park, much to the dismay of many current residents.

There is also a contentious debate about whether or not the Confederate Monument should stay or go.

Forsyth Park in the Spring

Spring is easily the most beautiful time of year to visit the park. It’s filled with a wide variety of flowers and trees, and many of which are spring bloomers.

If you can time your visit to coincide with the azalea blooms, then you’ll see an explosion of colorful flowers throughout the entire park.

Here’s some proof from my camera:

Year after year people visit during the spring months and fall head over heels in love with Savannah.

When those azaleas are blooming, everything looks extra magical!

First-Time Visitor Tip: Timing a trip to coincide with the azaleas is difficult, since you can’t predict exactly when they’ll look prettiest. The blooming season extends from mid-February to early April. The third week in March is usually a safe bet, but that’s also the week of St. Patrick’s Day — which is the most expensive and most crowded week of the year to visit Savannah. Bottom line: To get accommodations for anytime during the month of March, you need to book months in advance!

My second favorite time of year in the park is during the month of December.

It’s less crowded then than during the busy spring season and you obviously won’t see any azaleas blooming, but it’s still very pretty!

Most of the trees in the park are Southern live oaks, which means their leaves stay green during the winter months.

The city also plants some form of winter grass (maybe rye?), so the park looks lush and green all year long.

Notice how green everything looks in the two photos above? I took both of them in December.

The Spanish moss lives on the trees year-round, in case you’re curious!

Related Reading: Christmas in Savannah: Get the Inside Scoop!

Unique Photo Ops in the Park

The trees are by far the prettiest thing about the park, in my opinion.

Heck, the trees are the prettiest thing about Savannah, in general! They’re so beautiful.

It’s always nice if you can capture images of the Spanish moss when it’s backlit by the sun, and there are plenty of opportunities for that in the park.

You’ll also find lots of wildlife in the park!

In addition to the birds and squirrels you’d expect to see in Savannah, I’ve also spotted lots of owls and hawks. They usually hang out closer to the north end of the park.

Speaking of fountains in the park, this vintage water fountain always catches my eye!

I love the bright green paint and how the rust is taking over in many areas; it looks very timeworn.

I’ve never taken a sip from it, but then again — I tend to not drink water straight from the tap anywhere in Savannah.

The doggie fountain at the bottom makes for a nice bird bath, though!

In addition to the water fountain, there’s also an old-school police telegraph box located in the park.

You’ll find plenty of things to photograph if you look around and take your time.

UPDATE: As of May 2022, it appears someone has stolen the telegraph box. If you see it decorating the Airbnb you’re staying in, be a snitch so we can all enjoy it again!

The Farmers’ Market occurs in the park every Saturday from 9 am to 1 pm.

It’s best to get there early for the good stuff, since many of the most popular items sell out by about 11 am.

The market is a nice place to purchase local fruits, veggies, nuts, and honey.

My favorite booth to visit at the Farmers’ Market is Farmer Joe’s booth. I always purchase a few baggies of fresh pecans from him whenever I visit.

He’s a total sweetheart who always has a smile on his face!

Is Forsyth Park safe at night?

It’s better to visit during the day or in the early evening hours. The park is fairly empty after dark, particularly during the winter months. It’s also very dimly lit, especially along the interior of the park. If you go late at night, try to go with someone who is familiar with the area. It’s better to stay on the outskirts of the park at night than to venture into the interior section. There are SPD security cameras located throughout the park, both in full view and hidden.

Where do you park for Forsyth Park?

There’s a small lot on the south end of the park that offers off-street parking. The entrance is located on the zero block of E Park Avenue, across from The Sentient Bean. There is an even smaller lot on the Drayton Steet side, across from The Mansion on Forsyth. Street parking south of Gaston Street is free, so you can also park on any of the east/west side streets surrounding the park. The only streets you can’t park on are Whitaker and Drayton, which are the two busy north/south streets bordering the park.

Are there public restrooms in Forsyth Park?

Yes, there are public restrooms near the center of the park. They’re located next to The Collins Quarter restaurant. They’re currently open from 8 am to 6 pm, 7 days per week.

Can you picnic in Forsyth Park?

Yes! The park is a great spot for picnics. The southern end has wide open fields where you can enjoy the sun while you eat, while the northern section is nice and shaded.

Where to Eat Near Forsyth Park

There aren’t a lot of restaurants directly surrounding the park, but you’ll find a few places where you can grab a bite to eat or drink if you get hungry.

Where to Stay Near Forsyth Park

If you want to stay in a hotel or inn directly overlooking the park, you have two beautiful options:

Tours of the Park

I’m not aware of any tours specifically focused on the park, but the trolley tours stop at the park and offer up a bit of history along the route.

You can see each of the three trolley tour companies on my Best Savannah Tours page.

If you’re currently planning a trip to Savannah, I’ve created a few resources to help you out…

Are you just here for the pretty pictures of Savannah? No problem! You might want to check out these popular posts…

As always, if you have any questions for me about Forsyth Park, feel free to drop them in the comments section below!